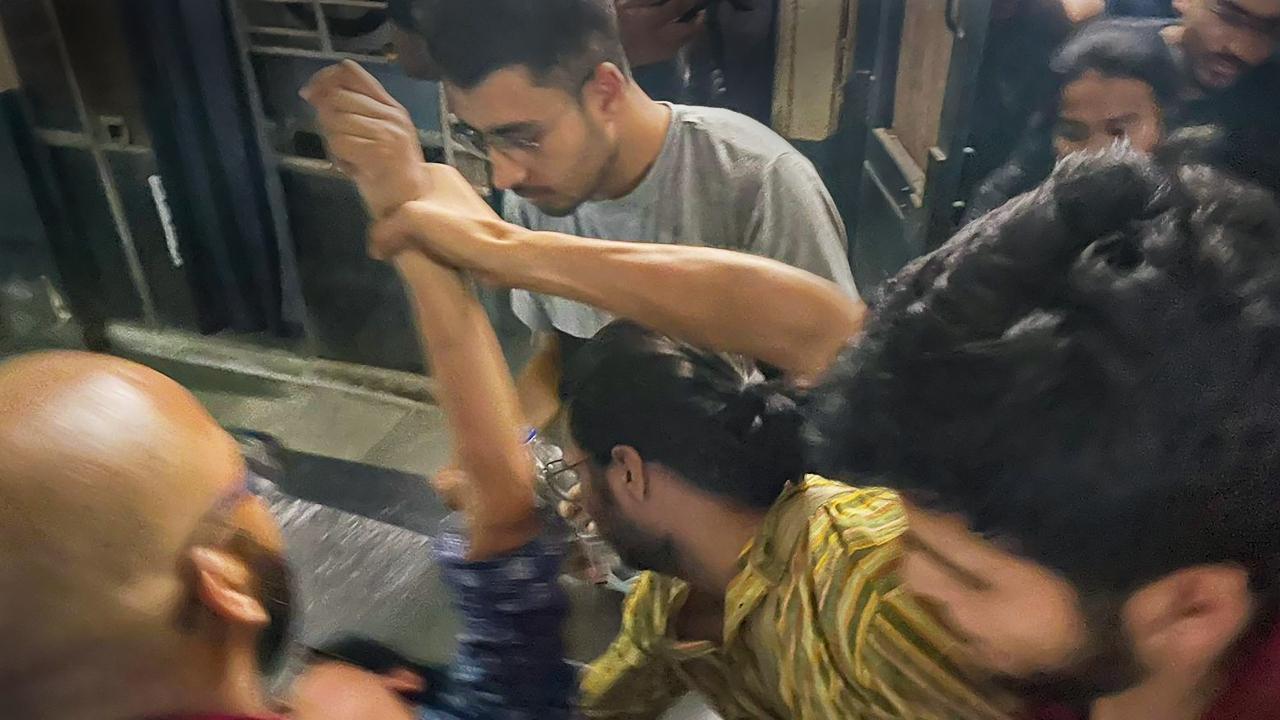 Two groups of students clashed with each other over serving non-vegetarian food in a mess at Jawaharlal Nehru University’s Kaveri hostel on the day of Ram Navami on Sunday, police said, leaving six students injured in the violence.

However, both the groups claimed that over 60 students from both the sides were injured.

Several purported videos of violence surfaced on social media, including one showing a student, Akhtarista Ansari, bleeding from her head. Officials have not confirmed the authenticity of the video.

The right-wing ABVP, however, denied the allegation and claimed that a puja program organized at the hostel on Ram Navami was obstructed by “leftists”.

Both sides accused each other of pelting stones and injuring their members. A total of six students have sustained injuries and have been sent to hospital, Manoj C, Deputy Commissioner of Police (Southwest) told PTI.

“There has been no violence so far. We are all posted here with our team. We have come here on the request of the university. We are trying to maintain peace,” he said. The senior police officer said, “At present the situation is peaceful. Both the student groups are protesting in a peaceful manner. Appropriate legal action will be taken on receipt of the complaint. The situation is peaceful.”

JNUSU alleged that the ABVP, the student wing of the Rashtriya Swayamsevak Sangh (RSS), used “muscle power and hooliganism” to create a ruckus, assaulting employees and asking them not to prepare any non-vegetarian items.

“They were attacking the mess committee for changing the dinner menu for all the students and excluding normal non-vegetarian items in it,” he alleged.

“JNU and its hostels are meant to be inclusive places for all and not for a particular section,” it said.

“In the evening, when the mess committee members were holding a meeting with the mess manager, ABVP workers barged in and started attacking them with (Ram Navami) flags. Later, the residents of Kaveri hostel gave an SOS to the student office bearers. Sent the message. Those who reached there were attacked with stones and sticks.”

The ABVP, however, rubbished JNUSU’s allegations and claimed that “leftists” disrupted a puja and havan organized by students on the occasion of Ram Navami.

“Some unaffiliated students had organized a puja and havan program at Kaveri hostel at 3:30 pm on the auspicious occasion of Ram Navami. A large number of common JNU students participated in this puja. Leftists objected, obstructed and obstructed Came for this. Stop the worship. They have created a false ruckus on the issue of ‘right to food’ (non-vegetarian food).”

The ABVP alleged that the posters of the puja were put up three days ago and since then, Left and Congress-affiliated National Students Union of India (NSUI) members were threatening and saying they would not allow it. be organized.

“There is no angle of non-vegetarian food. Ten to 12 ABVP workers have been injured. When the students were coming out after the puja, they were unintentionally caught as the student of the Left organizations pelted stones and attacked us with sticks. ABVP said.

The incident brought back memories of campus violence on January 5, 2020, when a mob of masked men stormed the campus and targeted students in three hostels, scuffled with sticks, stones and iron rods, Killed prisoners and broke windows. personal belongings.

At least 28 people, including JNU Students’ Union president Aishe Ghosh, were injured amid turmoil on the campus for nearly two hours.

The Delhi Police was attacked for not acting when the mob was rioting on the campus, and in particular for naming student union leaders, including Ghosh, in two FIRs related to vandalism on the campus.

India has 217 objects moving around the Earth